by Marilyn A Huestis
Introduction
A multitude of roles for the endogenous cannabinoid system has been proposed by recent research efforts. A large number of endogenous cannabinoid neurotransmitters or endocannabinoids have been identified, and the CB-1 and CB-2 cannabinoid receptors have been characterized. The presence of other receptors, transporters, and enzymes responsible for the synthesis or metabolism of endocannabinoids are becoming known at an extraordinary pace. The complex functions of this novel system have created multiple new targets for pharmacotherapies.

Research has focused on separating the behavioral psychoactive effects of cannabinoid agonists from therapeutic effects. These efforts have been largely unsuccessful. Another strategy centers on changing the pharmacokinetics of drug delivery to maximize therapeutic effect and minimize cognitive and subjective drug effects.

Development of oral, rectal, and transdermal medications of synthetic Δ9-tetrahydrocannabinol (THC)1) are examples of this type of approach. Additionally, the potential therapeutic benefits of administering unique combinations of cannabinoids and other chemicals present in the plant Cannabis sativa is being investigated by the oromucosal route. There also is strong interest in medications based on antagonizing endocannabinoid action. 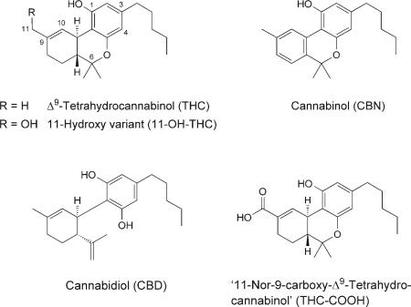 We have shown that the cardiovascular and subjective effects of cannabis are blocked by rimonabant, the first CB-1 cannabinoid-receptor antagonist, documenting that CB-1 receptors mediate these effects of smoked cannabis in humans. It is clear that the endogenous cannabinoid system plays a critical role in physiological and behavioral processes, and extensive research effort is being devoted to the biology, chemistry, pharmacology, and toxicology of cannabinoids.

Cannabis is one of the oldest and most commonly abused drugs in the world, and its use is associated with pathological and behavioral toxicity. Thus, it is important to understand cannabinoid pharmacokinetics and the disposition of cannabinoids into biological fluids and tissues. Understanding the pharmacokinetics of a drug is essential to understanding the onset, magnitude, and duration of its pharmacodynamic effects, maximizing therapeutic and minimizing negative side effects.

Cannabinoid pharmacokinetics encompasses absorption after diverse routes of administration and from different drug formulations, analyte distribution throughout the body, metabolism by the liver and extra-hepatic tissues, and elimination in the feces, urine, sweat, oral fluid, and hair. Pharmacokinetic processes are dynamic, may change over time, and may be affected by the frequency and magnitude of drug exposure.

The many contributions to our understanding of cannabinoid pharmacokinetics from the 1970s and 1980s are reviewed, and the findings of recent research expanding upon this knowledge are detailed. Cannabinoid pharmacokinetics research is challenging due to low analyte concentrations, rapid and extensive metabolism, and physico-chemical characteristics hindering the separation of drugs of interest from biological matrices and from each other. Drug recovery is reduced due to adsorption of compounds of interest to multiple surfaces.

Cannabis sativa contains over 421 different chemical compounds, including over 60 cannabinoids [1-3]. Cannabinoid plant chemistry is far more complex than that of pure THC, and different effects may be expected due to the presence of additional cannabinoids and other chemicals. Eighteen different classes of chemicals, including nitrogenous compounds, amino acids, hydrocarbons, carbohydrates, terpenes, and simple and fatty acids, contribute to the known pharmacological and toxicological properties of cannabis.

THC is usually present in Cannabis plant material as a mixture of monocarboxylic acids, which readily and efficiently decarboxylate upon heating. THC decomposes when exposed to air, heat, or light; exposure to acid can oxidize the compound to cannabinol (CBN), a much less-potent cannabinoid. In addition, cannabis plants dried in the sun release variable amounts of THC through decarboxylation. During smoking, more than 2,000 compounds may be produced by pyrolysis. The pharmacokinetics of THC, the primary psychoactive component of cannabis, its metabolites ‘11-hydroxytetrahydrocannabinol’ (11-OH-THC) and ‘11-nor-9-carboxy-tetrahydrocannabinol’ (THC-COOH)]2), and another cannabinoid present in high concentration, cannabidiol (CBD), a non-psychoactive agent with an interesting array of potential therapeutic indications, are included.

Mechoulam et al. elucidated the structure of THC in 1964, enabling studies of the drug's pharmacokinetics [4]. THC, containing no N-atom, but with two stereogenic centers in a trans configuration, has been described by two different atom-numbering systems, either the dibenzopyran (or Δ9) or the monoterpene (or Δ1) system. In this review, the dibenzopyran (Δ9) system is employed.