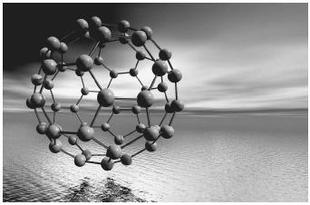 Fullerenes have attracted considerable attention in different fields of science since their discovery in 1985. Investigations of physical, chemical and biological properties of fullerenes have yielded promising information. It is inferred that size, hydrophobicity, three-dimensionality and electronic configurations make them an appealing subject in medicinal chemistry. Their unique carbon cage structure coupled with immense scope for derivatization make them a potential therapeutic agent. The study of biological applications has attracted increasing attention despite the low solubility of carbon spheres in physiological media.

The fullerene family, and especially C60, has appealing photo, electrochemical and physical properties, which can be exploited in various medical fields. Fullerene is able to fit inside the hydrophobic cavity of HIV proteases, inhibiting the access of substrates to the catalytic site of enzyme. It can be used as radical scavenger and antioxidant. At the same time, if exposed to light, fullerene can produce singlet oxygen in high quantum yields. This action, together with direct electron transfer from excited state of fullerene and DNA bases, can be used to cleave DNA. In addition, fullerenes have been used as a carrier for gene and drug delivery systems..

Found only in the northern Russian district of Karelia, Shungite was formed about 2 billion years ago. Shungite is composed of nearly all the elements of the Periodic Table. Though it is commonly known that not all chemical elements are beneficial to life forms, a surprising feature of this mineral is that only its health-giving components are absorbed by water. Moreover, experts have reason to believe that water contained in shungite deposits gave birth to life, because its natural structures and complexes are so similar to those of a living cell.
Shungite absorbs and eliminates everything that imposes a hazard to life, but concentrates and restores all that is beneficial. Scientists who have investigated this phenomenon have unanimously declared it a miracle.

Shungite is the only mineral that contains fullerenes. Only recently discovered, fullerenes were among the scientific sensations of the 20th century. Named after the great architect, Buckminster Fuller, this closed, hollow cage of 60 or more carbon atoms that form a fullerene molecule, resembles the geodesic domes popularized in his work. The shape of the fullerene molecule is similar to that of a soccer ball. Fullerenes are found in very minute quantities in nature, usually formed by lightening charges. How they came to be present in the shungite mineral remains a mystery. Realising their full potential will be one of the great sensations of the 21st century.