Fullerenes – Remedy of the 21st Century 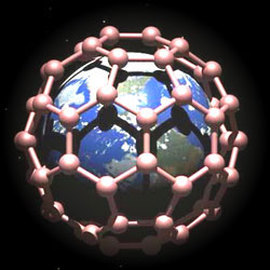 Fullerenes – Remedy of the 21st Century. Fullerene - a unique and absolutely new form of existence of carbon, was discovered by American chemists - theorists in 1985, for which they were awarded with the Nobel Prize. On the basis of space spectral analysis it was predicted the existence of hollow spheres consisting of carbon, inside these spheres many useful matters can be placed – from an inert gas up to the fragments of genetic codes. The only thing that was absolutely not clear where to find these unique fullerenes and how to study them properly. The answer came quite unexpectedly, when on the turn of 19 and 20 centuries, the fullerenes were discovered in the only on Earth deposit of Shungite on the bank of the Onega Lake in Karelia.

Nowadays fullerenes are used by physicists to create organic solar batteries, chemical lasers and “molecular computers”, as well as materials with high-temperature superconductivity.

Chemists use Fullerenes as a new type of catalysts and adsorbents with  the most optimistic prospects.

Biologists and pharmacologists use fullerene balls to deliver variety of substances into the cell and place on the surface of cell membranes, including antibiotics, vitamins and hormones. What is more they deliver fragments of genetic code while creating transgenic animals and plants. In a word, fullerenes gain entirely new features after comprising other molecules into its internal cavity!

Fullerenes are not toxic, do not suppress normal cells, but on the contrary help working to all the biological structures of the body. Being dissolved in water all the healing properties of fullerenes increase sharply.

Scientists have already found out that fullerene is the most powerful and long-acting antioxidant. Because of this fullerenes based medications help to cure a variety of inflammatory, virus, allergic and other diseases such as: asthma, flu, infertility, burns, ulcers, which are often difficult to cure by common therapy. For example, recently in experiments on animals it appeared that the fullerene is able to prevent the appearance and inhibits the progression of atherosclerosis.

At present the researches are underway the aim to open the way of using fullerenes to prevent the spreading of cancer cells.

As to mineral shungite, the existence of fullerene in it as important as the "stuffing" of the fullerene molecules, which determines their biological properties. Shungite is consisting of fantastically various mixture of complex organic substances constituting 97-99% of water-soluble organic matter.  This mixture is the part of solute along with fullerenes and it determines their properties.

Properties of the mysterious stone - schungite are not fully studied yet. Rather, we can say that science has made only the first steps in study of this amazing mineral, but its healing capabilities have not been studied, even by half. Sensational disclosure in the composition of fullerenes, the organic component of schungite has just begun. The most interesting discoveries are still ahead. That, however, should not prevent us to use schungite today.

Antioxidant No.1 What medical properties do fullerenes have?

First of all fullerenes are the most powerful ever known antioxidants that suppress the processes of peroxidation and free radical oxidation.

Antioxidants - substances that in their majority are vitamins, which purify the body from damaging molecules which are called free radicals. These molecules constantly appear in human bodies as a result of numerous oxidation-reduction processes that are aimed to maintain normal functioning of all organs and systems. Under natural conditions, the amount of free radicals is small, and their pathological effect on cells of the body is completely suppressed by intake of antioxidants from the outside (with the consumption of food containing these substances).

When the body is exposed to extreme factors (radiation, poisons), there appear too many damaging molecules, in this case the body needs bigger amount of antioxidants. It has been proven that the appearance of large amount of free radicals is the initial stage of many diseases from a simple cough to cancer.

The composition of any living cell always contains: antioxidants such as  ascorbic acid, tocopherols- vitamin E, carotenes and a number of others, lack of which in human body leads to severe disorders such as scurvy, and some of their excess significantly strengthens the immune and reproductive systems, accelerate healing and agenesis. These are exact pharmacological properties of vitamins C and E, carotenes and preparations containing them - sea buckthorn oil, wheat germ oil.

In other words, free radicals are a damaging universal origin, the quintessence of the diseases, which is responsible for aging, inflammation, oncology, genetic disorders, while antioxidants - are a universal protective origin.

The researchers came to a decision that among the antioxidants known to date, fullerenes ( or to be more exact, their aqueous solutions) are the most powerful ones. Fullerenes have the ability to reduce the concentration of free radicals, peroxide compounds and other so-called reactive oxygen species, but they don’t slow normal metabolism in human cells, as well as other antioxidants. However, the fullerenes qualitatively surpass all other antioxidants on the strength and duration of effect. Fullerenes being antioxidants hundreds or thousands times more effective than vitamins C and E, because of different mechanism of acting. Classical antioxidants are reductants, that is  they dye after meeting a free radical molecule dies and forming with it a harmless compound . To neutralize one free radical molecule it takes one molecule of reductant antioxidant. And Fullerene is catalyst! A fullerene ball has an ability to collect on its surface free radicals, which are quite firmly "stick" to it, while meeting on its surface, and recombine, while connecting each other and Fullerene remains itself. Because of this, the fullerene accelerates the recombination of free radicals in hundreds and thousands times. They act even in very small doses - fullerenes operate as efficiently as ten times higher doses of other antioxidants, and their effect even after a single injection into the body lasts for months.

Other biological property of fullerene is antitoxic action, the ability to accelerate the neutralization of poisons and toxins of various origins. In themselves unmodified Fullerenes are very inert, and as a consequence are low toxic. They are quite slowly excreted through the kidney while being intact. Fullerenes are accumulated in the liver, where they are act as hepatoprotector, this means that they act like preparation that protects the liver from toxic effects and accelerates the neutralization of toxins.

Internal toxins arising from burns and other necrotic processes have free radical origin. Therefore, all regularities of fullerene action are the same. Intoxication reduces, healing
accelerates.

And here is another unique property of the fullerenes - they normalize cellular metabolism, increase enzyme activity and increase the resistance of the cell to external influences (from heating to virus infection), including its genetic apparatus. Regenerative capacity of tissues increases.

In addition, Fullerenes have apparent anti-inflammatory and antihistamine effect, because of that they relieve pain, suppress a wide range of allergic diseases and improve immunity.

Institute of Therapy of Academy of Medical Sciences of Ukraine carried out experiments on human volunteers - cancer patients who are taking radiation regimen. So, the blood picture of these volunteers (the level of hemoglobin and other indicators) was restored within two weeks after irradiation. Usually after such radiation regimen the blood picture is restored in three to four months. In this case fullerenes protected primarily red blood cells and hematopoietic system.

It is known that radioprotector - a substance effective prior to irradiation.

Fullerenes have been shown to be effective, both before and after irradiation.

On this step of the research, the conclusion is this: Fullerenes relieve side effects of radiation and chemotherapy and significantly (in 1,5-2 times) retard the growth of oncoma.

All the information above clearly shows that Fullerenes can be truly named  the UNIVERSAL ANTIOXIDANT REMEDY of the 21-ST  CENTURY. 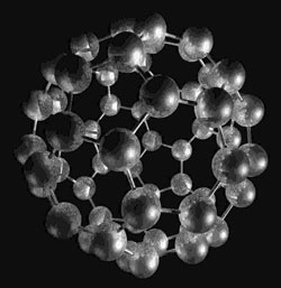