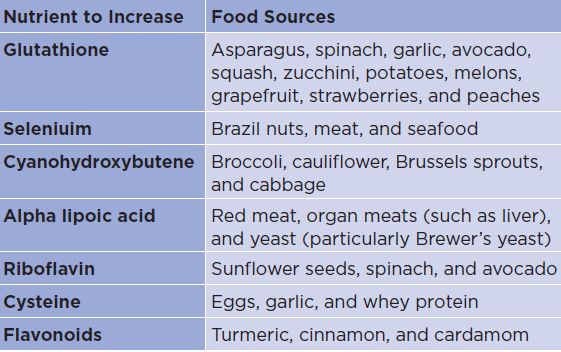 
The majority of glutathione in our body is created within our cells. As I’ve mentioned, glutathione is made by combining three amino acids: glutamic acid, cysteine, and glycine. According to researchers at Emory University, levels of glutathione vary over the course of the day. Glutathione levels are the highest for about six hours after each meal. Our lowest level of glutathione is in the morning before our first meal. While healthy children and young adults tend to have sufficient glutathione, production of this critical nutrient decreases as we age. Once we reach the age of 45, we begin to produce less glutathione and we produce less and less as we continue to age. Given this decline, and the multiple health conditions associated with a glutathione deficiency, it is important for adults to compensate for this decreased production by supplementing glutathione in their diet and in the form of supplements.

Glutathione is found in a variety of foods, particularly fruits, vegetables, and meats. Foods rich in glutathione include asparagus, spinach, garlic, avocado, squash, zucchini, potatoes, melons, grapefruit, strawberries, and peaches. Some foods contain other compounds which trigger the body’s production of glutathione.

For instance, cyanohydroxybutene increases glutathione production and is found in broccoli, cauliflower, Brussels sprouts and cabbage.

Herbs such as turmeric, cinnamon, and cardamom contain flavonoid compounds which increase glutathione.

Another randomized placebo-controlled clinical trial studied the use of a fermented food made from fruit, nuts, and vegetables rich in poly­phenols on the immune system in healthy volunteers. By the end of the four-week study, the researchers noted that eating the fermented food significantly enhanced intracellular glutathione levels in all of the white blood cells. In other words, boosting glutathione with this functional food also boosted immunity.


Food is an important way to increase glutathione production in the body. There are a variety of foods that provide glutathione or glutathione precursors making it possible for everyone to find some way to enhance the glutathione with their diet. If diet isn’t enough, there are lifestyle options as well.

Yoga and glutathione? As odd as it may sound, the practice of yoga increases our body’s production of glutathione. This was nicely demon­strated in a recent clinical trial. This study was conducted on healthy male volunteers from the Indian Navy who were divided into two groups a yoga group and a control group. The yoga group was trained in yoga for six months. The yoga schedule consisted of prayers, asana, pranayama, and meditation. The control group practiced routine physical training exercise, also for six months. Glutathione levels increased significantly (p < 0.05) in the yoga group over the control group after completion of training.

Another way to augment the antioxidant defense system of our body and to protect our glutathione stores is by spending time every day with our body in contact with the earth. The earth is a vast and continuous source of electrons. Free radicals, the cause of oxidative damage, are desperate for electrons. Instead of spending regular time in contact with this enormous source of electrons, we have insulated ourselves from it. One of the worse consequences of modern living is our lack of physical contact with the earth. Most of us spend our days insulated in our rubber soled shoes and living in buildings, sometimes several stories off of the ground. Very few individuals take their shoes and socks off and put their feet on the earth every day. If they did, their bodies would experience an influx of electrons and antioxidant effects. This influx, in turn, would spare our beleaguered antioxidants such as glutathione.

The practice of yoga increases our body’s production of glutathione.