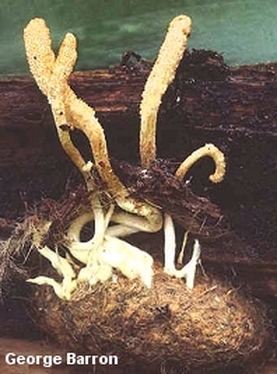 There are currently more than 680 documented species of Cordyceps, found on all six inhabited continents and in many climatic zones and habitats, and occurring parasitically or commensally with a range of hosts.

The medicinal values of Cordyceps spp. have been recognized since ancient times in China and the surrounding Orient; but knowledge of this only reached Western scientific audiences in 1726, when it was introduced at a scientific meeting in Paris. The first specimens were carried back to France by a Jesuit priest, who chronicled his experiences with  the Cordyceps mushroom during his stay at the Chinese Emperor’s court (1,4).

The range of therapeutic uses claimed for Cordyceps spp. is far reaching; although most of them have yet to be sufficiently investigated. In TCM,C. sinensis has been used to treat conditions including respiration and pulmonary diseases, renal, liver, and cardiovascular diseases, hyposexuality and hyperlipidemia.

It is also used in the treatment of immune disorders and as an adjunct to modern cancer therapies (chemotherapy, radiation treatment and surgery) (1). C. sinensis is believed by many, particularly in and around Tibet, its place of origin, to be a remedy for weakness and fatigue; and it is often used as an overall rejuvenator for increased energy while recovering from a serious illness. Many also believe it to be a treatment for impotence, acting as an aphrodisiac in both men and women.

C. sinensisis often prescribed for the elderly to ease general aches and pains. TCM practitioners also recommend the regular use of C. sinensis in order to strengthen the body’s resistance to infections, such as colds and flu, and to generally improve the homeostasis of the patient

Cordyceps spp. contains a broad range of compounds, which are considered nutritional. C. sinensis contains all of the essential 18 amino acids. The content of aminoacids after hydrolysis is mostly reported in the range of 20% to 25%. The highest contents are glutamate, arginine and aspartic acid. The major pharmacological components are arginine, glutamate, tryptophan and tyrosine.
Also found are vitamins E, K, and the water-soluble vitamins B1, B2, and B12.

C. sinensis contains a large amount of polysaccharides, which can be in the range of 3% to 8% of the total weight and usually comes from the fruiting bodies, the mycelium of solid fermentation submerged cultures and the broth(7). Four-D-glucan exopolysaccharides from C. mili-taris with different molecular masses ranging from 50 to 2260 kDa were reported by Kim. In the case of C. sinensis, most of the hetero polysaccharides contained mannose, galactose, glucose, and mannose in higher levels with smaller amounts of arabinose, rhamnose, fruc-tose, and xylose, respectively. The average molecular massvaries between 7 and 200 kDa.C. militaris polysaccha-rides consisted mostly of glucose, galactose, and mannose with traces of rhamnose and xylose and average molecular weight approximately 60 kDa Proteins and Nitrogenous Compounds.

Cordycepss pp. contain proteins, peptides, polyamines, all essential amino acids, some uncommon cyclic dipeptides,including cyclo-[Gly-Pro], cyclo-[Leu-Pro], cyclo-[Val-Pro], cyclo-[Ala-Leu], cyclo-[Ala-Val], and cyclo-[Thr-Leu].
Small amounts of polyamines, such as 1,3-diaminopropane, cadaverine, spermidine, spermine, and pu-trescine, have also been identified Many nucleosides have been found in Cordycepsspp., including uridine, several unique deoxyuridines, adenosine, dideoxyadenosine, hydroxyethyladenosine, cordycepin deoxyadenosine], cordycepin triphosphate, guanidine, deoxyguanidine,and other altered and deoxygenated nucleosides, ﻿many of which are found nowhere else in nature ﻿

Chen and Chu found cordycepin and 2-deoxyadenosine inan extract of C-sinensis.Sugar-binding proteins named lectins were isolated fromC. militaris. N-terminal amino acid sequence differed greatly from other lectins Production of the nonri-bosomal peptides cicapeptins.. C. heteropodawere reported by Krasnoff et al. Sterols A number of sterol-type compounds have been found in Cordycepsspp.: ergosterol,-3 ergosterol, ergosterol perox-ide, 3-sitosterol, daucosterol, and campeasterol, to name a few.
Another compound, sterol H1-A was found byChen et al. and it was claimed to be effective in thetreatment of autoimmune disorders


Cordyceps militaris is pretty much the coolest mushroom ever,

first I am obliged to discuss CMS, a common problem among mushroom hunters and mycologists.

The acronym stands for Cordyceps Moron Syndrome, and symptoms present in two ways. The CMS sufferer 1) plucks any club fungus instantly from its substrate, regardless of what treasures might be found beneath the mushroom, and 2) cannot manage to take a decent photo of a Cordyceps even when the first symptom is bypassed.

The genus Cordyceps consists of clublike parasites that attack underground puffballs or insects. The puffball-parasitizing species are cool enough (see Cordyceps ophioglossoides for an example, and see the Key to Mycotrophs for a key to 5 North American species), but the bug parasites are astounding. They erupt from insects, bringing to mind the infamous scene in Alien in which John Hurt has a very bad meal.

Cordyceps militaris is the best-known and most frequently collected bug-killing Cordyceps, but there are dozens of "entomogenous" species in North America. The victim for Cordyceps militaris is a pupa or larva (usually of a butterfly or moth). Its mycelium colonizes the living insect and mummifies it, keeping it alive just long enough to generate the biomass it needs to produce the mushroom--a "spore factory" that allows the Cordyceps to reproduce.