Curcumin - The Story so Far

Curcumin is a polyphenol derived from the herbal remedy and dietary spice turmeric. It possesses diverse anti-inflammatory and anti-cancer properties following oral or topical administration. Apart from curcumin's potent antioxidant capacity at neutral and acidic pH, its mechanisms of action include inhibition of several cell signalling pathways at multiple levels, effects on cellular enzymes such as cyclooxygenase and glutathione S-transferases, immuno-modulation and effects on angiogenesis and cell-cell adhesion. Curcumin's ability to affect gene transcription and to induce apoptosis in preclinical models is likely to be of particular relevance to cancer chemo-prevention and chemotherapy in patients.

Although curcumin's low systemic bio-availability following oral dosing may limit access of sufficient concentrations for pharmacological effect in certain tissues, the attainment of biologically active levels in the gastrointestinal tract has been demonstrated in animals and humans.

Sufficient data currently exist to advocate phase II clinical evaluation of oral curcumin in patients with invasive malignancy or pre-invasive lesions of the gastrointestinal tract, particularly the colon and rectum.

Curcumin is a natural polyphenol used in ancient Asian medicine. Since the first article referring to the use of curcumin to treat human disease was published in The Lancet in 1937, >2,600 research studies using curcumin or turmeric have been published in English language journals. The mechanisms implicated in the inhibition of tumorigenesis by curcumin are diverse and appear to involve a combination of anti inflammatory, antioxidant, immuno-modulatory, proapoptotic, and antiangiogenic properties via pleiotropic effects on genes and cell-signaling pathways at multiple levels. The potentially adverse sequelae of curcumin's effects on proapoptotic genes, particularly p53, represent a cause for current debate.

When curcumin is combined with some cytotoxic drugs or certain other diet-derived polyphenols, synergistic effects have been demonstrated. Although curcumin's low systemic bioavailability after oral dosing may limit access of sufficient concentrations for pharmacologic effects in tissues outside the gastrointestinal tract, chemical analogues and novel delivery methods are in preclinical development to overcome this barrier. This article provides an overview of the extensive published literature on the use of curcumin as a therapy for malignant and inflammatory diseases and its potential use in the treatment of degenerative neurologic diseases, cystic fibrosis, and cardiovascular diseases. Despite the breadth of the coverage, particular emphasis is placed on the prevention and treatment of human cancers. 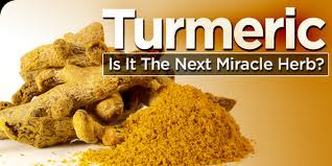 Curcuma longa (turmeric) has a long history of use in Ayurvedic medicine as a treatment for inflammatory conditions. Turmeric constituents include the three curcuminoids: curcumin (diferuloylmethane; the primary constituent and the one responsible for its vibrant yellow color), demethoxycurcumin, and bisdemethoxycurcumin, as well as volatile oils (tumerone, atlantone, and zingiberone), sugars, proteins, and resins. While numerous pharmacological activities, including antioxidant and antimicrobial properties, have been attributed to curcumin, this article focuses on curcumin's anti-inflammatory properties and its use for inflammatory conditions.

Curcumin's effect on cancer (from an anti-inflammatory perspective) will also be discussed; however, an exhaustive review of its many anticancer mechanisms is outside the scope of this article. Research has shown curcumin to be a highly pleiotropic molecule capable of interacting with numerous molecular targets involved in inflammation.

Based on early cell culture and animal research, clinical trials indicate curcumin may have potential as a therapeutic agent in diseases such as inflammatory bowel disease, pancreatitis, arthritis, and chronic anterior uveitis, as well as certain types of cancer. Because of curcumin's rapid plasma clearance and conjugation, its therapeutic usefulness has been somewhat limited, leading researchers to investigate the benefits of complexing curcumin with other substances to increase systemic bio-availability. Numerous in-progress clinical trials should provide an even deeper understanding of the mechanisms and therapeutic potential of curcumin.