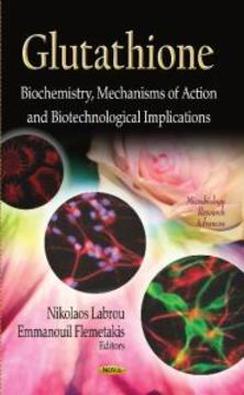 Glutathione (gamma-glutamyl-cysteinyl-glycine; GSH) is the most abundant low-molecular-weight thiol found in both prokaryotic and eukaryotic organisms.

GSH has potent electron-donating capacity that renders GSH both a potent antioxidant and a conventional cofactor for enzymatic reactions. GSH participates in many cellular functions such as redox control, stress defense, drug detoxification and cell signaling including regulation of DNA and protein synthesis, gene expression, apoptosis and cell proliferation.

GSH concentration in the cell is homeostatically controlled, being continually self-adjusting with respect to the balance between GSH synthesis, its recycling from GSSG and its utilization by other enzymes. Alterations in its concentration contribute to oxidative stress, which plays a key role in aging and the pathogenesis of many diseases associated with redox processes modulation.

This book discusses cutting-edge developments and deals with the information gained over the last few years on the physiological, biochemical and molecular roles of the GSH and its significance in mammalian, microbial and plant cells.