The Miracle of Fulvic/Humic Acids 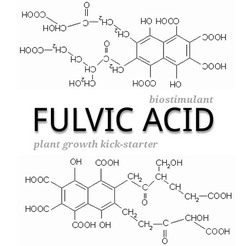 In nature, water carries minerals in an organic form. They are carried with organic acids such as carbonic acid (a mix of carbon, hydrogen and oxygen that develops as water attracts carbon dioxide from the air) and fulvic acids from the soil. These organic acids unfortunately form toxic by-products called trihalomethanes (THMs) when mixed with chlorine. Chlorination destroys nature’s way of providing minerals in water in an organic (biologically available) form.  Natural organic acids are typically removed from water before chlorination and many benefits are lost.

Fulvic acids (hundreds have been identified) are part of the humic structure in healthy soils. They are organic molecules exuded from aerobic microbes during the breakdown of organic matter in the soil. Fulvic acids are simple. Their elemental composition is Carbon (C), Hydrogen (H), Oxygen (O), Nitrogen (N), and Sulfur (S)—the same basic elements that make up all life. At the same time, they are extremely complex.

Fulvic acids have never been fully characterised or clearly defined. Scientists still do not thoroughly understand their structure, nor do they understand exactly how they work. What we do know is that the structure of fulvic acids includes multiple voids and binding sites for holding minerals, vitamins and other plant complexes.

Fulvic acids often carry 60 or more different minerals and trace elements as part of their molecular make up. They are completely soluble in water - even with a full load of minerals - they can hold many times their weight. This makes fulvic acids an exceptional asset. They carry minerals in water and make them available to biological organisms. However, fulvic acids are much more than mineral carriers.

Fulvic acids function in so many ways within a healthy ecosystem that they have been referred to as the missing link in modern agriculture. They are Nature’s miracle of unparalleled proportion. Beyond mineral carriers, fulvic acids function as electrolytes, enzymes, antioxidants, antibiotics, buffers, and scavengers of heavy metals and other toxins.

They improve nutrient absorption by increasing cellular permeability; they catalyse (speed up) metabolic reactions, they scavenge free radicals, buffer the pH in soils and water, and deactivate pesticides, radioactive compounds and other toxins.

Fulvic acids as electrolytes
Electrolytes are ionic substances that dissolve in water to produce a solution capable of conducting electric current; they facilitate the flow of electrons. Fulvic acids are poly-electrolytes.  They have so many binding sites that they can function as both positively charged and negatively-charged electrolytes at the same time, called zwitterions.

When consumed in water, they assist in maintaining cellular function.  Cells have been referred to as miniature batteries. Their membranes store and discharge energy. It is essential that the electrical potential of each cell remains charged. In fact, life is dependent on cellular electrical potential.

Fulvic acids operate as battery chargers. Because of their electrolytic potential, they have instant cellular revitalizing characteristics, increasing cellular permeability by charging cell membranes for maximum absorption of vitamins, minerals and other nutritional components.

Fulvic acids as antioxidants
Fulvic acids are bi-directional super antioxidants with the ability to render all types of free radicals neutral and harmless. As powerful electrolytes, they can act as an acceptor or a donor in the re-establishment of electrochemical balance.

Enzymes
An enzyme is a catalyst that speeds up a chemical process without becoming a part of the reaction. Research has shown that fulvic acids improve many enzymatic reactions. The fact that minerals activate many enzymes and fulvic acids supply minerals, helps to explain the synergy.

Antibiotics
There are two processes in nature that cannot be duplicated - photosynthesis and humification. The first involves the creation of organic matter and the second involves the breakdown of organic matter. Miraculously, humification preserves the original life giving, protective, and healing components of plants. These become concentrated in fulvic acids to impart subsequent generations with a head start in much the same way that mother’s milk provides immunity to her children.

Humification protects many original components from completely breaking down. Small strands of RNA and DNA, remain intact. The DNA of every species on Earth, has (at one time or another) become a highly refined component of fulvic acids. These can impart immunity to future generations if they are allowed to participate in Nature’s continuing cycle of growth.

Fulvic acids have been overlooked by medicine and science. They have been treated as impurities in water. Yet recent studies show they contain hidden treasures that serve as antimicrobial, antiviral and antifungal agents capable of working alone or in combination with other natural remedies.